Fluttershy (Fluttershy Stewart) is a yellow pegasus and is the most timid and shy, and is the spouse of Edward, and the mother of Wise Acre and Shady Flower. She's very nervous, but she's also incredibly kind. She's great at taking care of animals, and shows her gentle and friendly nature when helping them. Her dragon, a Woolly Howl, is Butterfly.

She is normally very shy and quiet, and usually seen tending to her animals, especially the not-so-kind Angel Bunny. She represents the element of kindness.

Like Rainbow Dash, Fluttershy hails from Cloudsdale. As a filly, she was not a very good flier, and was bullied by some of the other ponies, who nicknamed her "Klutzershy". She was taller and ganglier than the other foals, with slightly larger wings. Rainbow Dash, however, stood up for her, and challenged the bullies to a race in which the participants unintentionally knocked Fluttershy down to the ground, a place she had never been before. She was saved from a rough landing by falling onto a large group of butterflies. Upon seeing all the different animals which lived on the ground for the first time, Fluttershy was so overjoyed, she started singing. A few moments later, Rainbow Dash's sonic rainboom scared all the animals away; however, Fluttershy was able to calm them down, and learned that she had a talent for communicating with animals. It was at that point she gained her cutie mark, and a lifelong love of animals.

Fluttershy has a light yellow body and a pink mane and tail. She also has teal eyes.

Pegasus Physiology: Fluttershy is a pegasus who lives in a cottage and is an animal caretaker.

The Stare: Fluttershy employs this when dealing with misbehaving animals. This ability is powerful as it can 'control' chickens up to her own pet bunny, Angel. She can only use it when someone's life is in danger or to maintain order. She even subdued a cockatrice with the Stare, despite the cockatrice having a petrifying gaze, showing how powerful her Stare is. The only being that ever showed immunity was Discord.

Sewing Expertise: She is familiar with sewing, as Applejack describes as "freaky".

Music Conductor: When Fluttershy is first introduced, she is conducting a rehearsal for a choir of birds for the Summer Sun Celebration.

Singer: She also can sing, her rendition of the Evil Enchantress song, the Hush Now Lullaby, So Many Wonders, and Find A Pet Song which is a duet with Rainbow Dash.

Force Powers: Fluttershy is really strong with the Force. As she can use it to call upon help from other animals through Animal Friendship, and even strengthen her "Stare" with it. But her best skill is her healing capabilities, which she uses for helping others whom are inured by using the Force to heal them. 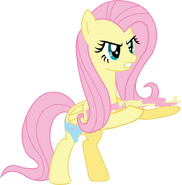 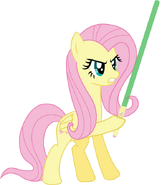 Add a photo to this gallery

Retrieved from "https://dragon-quest-adventures.fandom.com/wiki/Fluttershy?oldid=10321"
Community content is available under CC-BY-SA unless otherwise noted.