Emperor Lunarlight is the original ruler of Equinelantis and all of Equestria, he's the father of King Solar Flare. As well as the Grand Jedi Master in that time. He lived in Equinelantis with his wife, Empress Moonbeam. He taught his son many of the things he knew about being ruler, the sun, moon, and everything else. Soon King Solar Flare grew into a adult stallion alicorn and married Queen Starshine. Then years later, Starshine gave birth to a white alicorn filly with a pink mane. They named her: "Celestia". Years later when Celestia grow up into a young filly, Starshine gave birth to a blue alicorn filly with a light blue mane, in which they named her: "Luna."  He taught them everything he knew about Equestria as well as the moon and sun. Lunarlight also spent some time with his grandchildren, and taught them about being the rulers of Equestria.

But years later, after Yuna and her friends discovered Berk, and Brian Griffin and his friends and family came.

But now, Lunarlight is now one with Force and often returns in Spirit form to give our heroes advice or just to come and help when needed.

Emperor Lunarlight is a king, wise, and loving stallion. He cares for many things in his especially when it comes to his son and grandchildren. Despite his royal duties he is willing to take time off to spend time with his family. Then when there is a tough situation, he is willing to do anything to protect his family and his kingdom. 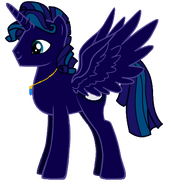 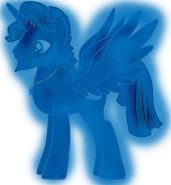 Emperor Lunarlight (spirit form)
Add a photo to this gallery
Retrieved from "https://dragon-quest-adventures.fandom.com/wiki/Emperor_Lunarlight?oldid=9850"
Community content is available under CC-BY-SA unless otherwise noted.