Edward (full name: Edward Stewart) is a blue Furness Railway K2 class mixed-traffic engine. He runs his own branch line with BoCo. Edward is one of the oldest engines on Sodor and is occasionally made fun of for his old age. Edward is very wise and optimistic and spreads his knowledge and encouraging attitude towards the other engines.  And is the spouse of Fluttershy and the father of Wise Acre and Shady Flower.

Edward is kindhearted and always keen to help a friend in need. The small engines trust him to lend a listening ear and sympathetic advice. He is a hard worker too and always does his best to finish a job. If ever an engine misbehaves or acts out, it's Edward that the Fat Controller turns to in order to soothe things out.

Sadly, the big engines often see Edward as old-fashioned and slow. While it is true he is the oldest engine on the North Western Railway - it must be noted he helped build it - he has proved time and time again that he is more than capable of working as hard as any engine, but he is a more clever and wiser engine, too. In fact, he and BoCo are the only engines who look after Bill and Ben and know when to put them in their place should they misbehave and like any other wise old engine, he stands for no nonsense from anyone, especially from the bigger engines.

The Reverend W. Awdry stated that Edward is based on a heavily modified Sharp, Stewart and Co. "Larger Seagull" K2 Class, supplied to the Furness Railway in 1896.

Sodor "historian" Martin Clutterbuck notes that Edward bears a close resemblance to an LNER D3/4 "Glen" (NBR Reid Class K) 4-4-0 from the London and North Eastern Railway. At any rate, the Reverend W. Awdry used an engine of this class to represent Edward on his model railway.

Visible Crovan's Gate Works modifications are: making the rear splasher flush with the cab, new cab windows as opposed to cutaways in his cab side sheets and square cab lookouts as opposed to the original round ones. In both the Railway Series and television series, Edward is depicted with a Fowler tender.

Edward is painted in the North Western Railway's sky blue livery with red-and-yellow lining and the number "2" painted on his tender sides in bright yellow with a red border. In the Railway Series, he carries two builder's plates on the sides of his cab.

It can be assumed that, before arriving on Sodor, Edward was painted in the Furness Railway's Indian red livery with the letters "FR" written in yellow on his tender sides and black wheels.

When in Equine form, Edward is a blue pegasus with black hair and hooves, and blue eyes. And has the number 2 for a cutie mark. 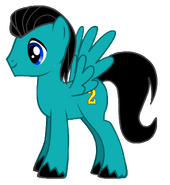 Edward (with his AA-12 shotgun) 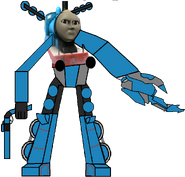 Edward's Trainbot form
Add a photo to this gallery
Retrieved from "https://dragon-quest-adventures.fandom.com/wiki/Edward?oldid=7712"
Community content is available under CC-BY-SA unless otherwise noted.